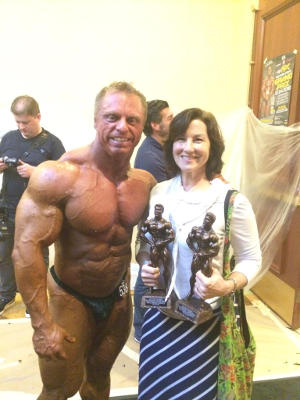 Wow, what a crazy ride this year. I began the year with the intention of earning a pro card and simply competing in an IFBB contest. The end result was something much better than I had hoped for.

My preparation for this was documented in great detail and is actually available on my website for purchase. I started my prep at 225 lbs roughly 12-13 weeks out and fairly lean, I would say 7-8%. For this prep I actually employed cardio, more than I have done in a LONG time, and I also had more of a sparse low calorie diet. This worked well for me though as my waist trimmed down noticeably (this was also due to being able to train abs consistently for the first time since 2005 before my surgeries) and I started to see a little more detail than usual. I weighed in for this one at 219 and was dry and tight. That night had a got a bad case of diarrhea (I know gross), and dropped to 215. This would be in a factor further down the road in determining the course of my competitions. I ate like crazy that night, tons of nutrigrain bars, rice crispy treats, as they are very easy on my stomach, extra rice, extra steak, and a half jar of peanut butter. I woke up back to 217, and had pretty much nailed the look I wanted. I went on to get straight first place votes in the over 35 and over 40 classes and overalls. This was one of the happiest days of my life competitively. To see all the years as an amateur gone, and to start a new beginning, was really an emotional time for both myself and my wife. I actually broke down and cried a bit on stage. It was also neat because my wife got to come backstage with me and meet a bunch of people like the promoter Steve Weinberger, the Manions, and others. This was great because she was being recognized for all her effort.

This was also a great weekend because one of my clients, Walter Martin was competing with me and he also got his pro card! How cool is that! After the show, I had a thought occur to me the next morning. I knew the Vancouver Pro was coming up, and I knew that I had got down to 215 just by pooping a little extra, so I thought how hard could it be to get down another 3 lbs to 212? The Vancouver Pro show had a 212 class, and I decided to do it that day. I went to the gym and hit legs with Shaun Clarida the next day and was already back in prep mode.

Vancouver – A Painful but Valuable Lesson

I continued to diet pretty hard things were looking really good. At one point I actually got down to about 214 in the morning. I was so excited I made a Facebook post about it, only one problem, I was always back up to 217-218 in the afternoon, which is when I would be weighing in. I called the hotel and asked that a scale be placed in the room, and they delivered on this. When I arrived at night, I was 218. I knew I would wake up about 214-215 and would have to drop even further to make weight. The only thing I could figure would to just not eat the next day. I had called a few folks and was told Jose Raymond and other awesome 212 competitors often go without eating for a day, so I thought well that must be the best approach. Well, I woke up right there at 214-215, and just didn’t eat or drink anything. The day passed and I was so weak and tired I just laid in bed the entire day only getting up to weigh myself. Finally about 30 minutes before check in I weighed myself and the scale said 211.8. I figured I was good then. I headed down and had to weigh in another hour or so but when I weighed in I was shocked. I was around 210. I felt pretty awful. Weak, small, tired….so I did try to eat. At that point I couldn’t eat much at all because my stomach was so shrunken up, I ended up undereating, and had no volume to muscle during prejudging. After prejudging I stopped in the hotel gift shop and got 3 ice cream bars, a big bag of M&M’s, ate a box of cereal, and much much more. By the night show I started to look my normal self, I was getting there anyway but it was too late, and I ended up in 5th place. Although this wasn’t what I was expecting there was something else that I did expect to happen come to fruition that made me extremely happy. Two of my clients actually won. Shaun Clarida won the 212 class and Fouad Abiad won the open. This was what made the experience a great one for me, my experience aside. We got to share a good meal afterwards as well, and I felt extremely happy and be blessed to be in my position. Tampa – Good Times in the Sauna  I thought Vancouver was it and would call it a year, but Tuesday of the next week I had a surge of energy. I woke up and felt great, and had a great week of training. I thought to myself maybe there is another way I can make weight as I had got back up to 221 at that point. I was super full and tight, and I decided since the hotel had a sauna I would stay in that thing until I made it. I arrived at the hotel and went down to exercise room where the sauna was. I was 218 on that scale. During the day of weigh in I had 3 meals and simply ate egg whites, not much, but I wasn’t starving either like in Vancouver, so it wasn’t too bad. Now mind you, this was about 11am and check in was at 4pm if I remember correctly (maybe it was 5?). I was in and out, mostly in, until around 3:30. At that point the scale in there said 211.8. Great! I went back down and met up with my friend Scott Stevenson and we went to the meeting. Much to my surprise I weighed in at 214. I was stunned. I had 1 hour to lose another 2 lbs. I literally ran through the expo where the booths were set up and found the biggest pair of sweat clothes I could find and Scott and I headed back to the sauna. We were on limited time so he poured water over the rocks in the sauna until it hit 160 degrees. It was hot.

I continued to pour sweat. After an hour I was under 210 on the exercise room scale so we headed back. I reweighed and was 211.6. Ah finally. I ate a quick meal and drank some water and actually felt fantastic. That night I continued to eat steak, rice, and pound Nutrigrain bars and peanut butter. I woke up back to 217 and looked and felt great. I ended up getting 3rd place out of 16, and was ecstatic. I was shocked and so happy.

San Antonio and an Olympia invite?

Well with the 3rd place I had accrued 4 points toward the Mr. Olympia qualification. I knew 7 points would get me into the Mr Olympia. I sat down and did every calculation you can imagine, every scenario, it was kind of fun. For me to get to the magic 7, I knew I would need 3 more points, thus a 3rd place finish. Since I had done so well in Tampa, I figured this was reasonable and possible, so I cranked it back up with the goal of making the top 3. I decided to get into San Antonio the night before the show so I had more time to play with my weight the next day. I ate chicken during the weigh in day this time to avoid sodium (so no egg whites) and also didn’t drink. I had checked the hotel and found that there was no sauna, so went old school from my wrestling days and got one of those sauna suits.

Scott was here to support me as well so we turned his bathroom into a steam room kinda sorta. We shut the door, turned the shower on too as hot as it was go, and I just sat there and man did I sweat. Once we got under 212, it was pretty much time to go weigh in. I was 211.6 on the scale in my room, so I headed down to the weigh in and bam weighed in at 212.8. All those stories you hear about people getting the benefit of t he doubt during weigh in, well I didn’t see that..LOL! I went to the bathroom, but nothing was in me. I was very dejected and after about 10 minutes went back in and just figured well I guess I’ll be in the open. I was told to blow all my air out prior to stepping the scale and to my surprise this time I was 211.8. Ah yes, I still would have a shot at the 212’s.

I pounded down some food again and snacks like nutrigrain bars, but couldn’t quite fill out like I had in Tampa. I wasn’t that much different, but I was slightly better in Tampa. I ended in 5th place and missed out on the Olympia qualification by 2 points.

That put the wraps on the competitive year for me. What a great year, and I say that will utmost sincerity, not to put on an act. People have asked me continually since I got back from the last show if I am disappointed I just missed qualifying for the Olympia, and although I am a little, it’s nothing compared to the joy and great experiences I had this year.

I asked my wife what her favorite show was and she said the Team U where I won my card. I would have to agree, but every show I did, every one of them, had a huge positive impact on me in some way, whether it be seeing my clients win, just hanging with my good friends like Scott, etc.

These last 3 years I have said to myself I wonder if my body will start going downhill next year. I mean I know I can’t improve forever, but I have a feeling I can be even better next year. I feel like now I have a formula to make 212 and then go onstage very big and full (conditioning was not an issue in any show I did). I do expect to have a very good year next year, and would like to crank it up again in the spring!

That’s all for now – thanks for reading!